This exceptional scenario offers a wide range of landscapes: majestic white peaks, forests, wide valleys, streams, rivers and lakes, enchanting plays of light between the peaks of the Dolomites, quaint mountain villages with their characteristic church spires and thousands of different shades of the unspoiled nature.Characteristic is the panorama of Lake Garda, which narrows and stretches like a fjord between the mountains. Mediterranean lightness and alpine lightness give the cities of Bolzano and Merano an irresistible charm. The excellent wines of the region are known far beyond the borders.

Palm trees, cypresses, lemon trees – hardly another city in South Tyrol is as Mediterranean as Merano. The spa has changed: from the meeting point of the European nobility to a modern gem with a historical backdrop. In Merano, everything seems even calmer, even more idyllic, even more beautiful than elsewhere in South Tyrol.

The gardens of Trauttmansdorff Castle are Meran’s pride – and they do not stop growing. Opened in 2016, the “Garden for Lovers” is the new highlight of the twelve-acre facility high above the city.

Whether in the sun or rain: A stay at the spa is part of every visit to the traditional spa town. A glass cube in the middle of the city, the interior designed by the South Tyrolean star architect Matteo Thun. Or how about a chairlift ride up the mountain, from where you can walk to the town of Tyrol to enjoy a café and the view?

South Tyrol’s provincial capital lies between vineyards and the Dolomites.
The rich and varied history of the city can also be seen in the architectural styles: the medieval center, the Art Nouveau style of the ending K & K monarchy and the Neoclassicism of the Mussolini dictatorship alternate with modern facades. Romantic streets, markets, and bustle will accompany your tour.

Be sure to visit the Laubengasse, the most famous street in Bolzano. It runs about 300 meters from east to west and used to be the trading route par excellence. It is still a popular shopping street today. From traditional to modern shops you will find everything your heart desires. Even if you are not in the shopping mood, the Laubengasse with its special flair invites you to stroll.

Enjoy an Aperol Spritz or a Hugo in one of the numerous cafes on the edge of Waltherplatz, the most famous square in Bolzano. Its namesake, Walther von der Vogelweide, towers as a white statue in the middle of the square. Or treat yourself to incredibly delicious chocolate or ice cream at Loacker, the waffle and chocolate specialist well-known beyond South Tyrol’s borders.

3. Brixen – the city with a beautfiul panorama

Brixen is the oldest city in South Tyrol. The old town offers an exciting link between the joie de vivre and contemplation. The unique cathedral square in the Alps, the numerous sacral buildings, the listed, large medieval old town, arcades and crenelated alleys, museum treasures, craft tradition and archaeological gems to discover – all that makes Brixen so multifaceted.

You can expect modern cafes and excellent restaurants, attractive shops and entertaining events. For history buffs, a visit to the cathedral, which was originally built in Romanesque style and was consecrated in 1758 in its present Baroque form, is worthwhile. The cloister of the cathedral is a building of great art-historical importance. It is a Romanesque building with 14C cross vaults. It is a prayer and burial place of the clergy.

Food and Drink – top 3 to try in Trentino – Alto Adige

A hearty and refined mountain kitchen

Since South Tyrol belonged to Austria for a long time and thus to the Austro-Hungarian KuK monarchy, the influence of German, Austrian, Hungarian and Slavic cuisine is clearly noticeable here. The traditional cuisine of the farmers of South Tyrol and Trentino is a very poor, calorie-containing and hearty cuisine, based on the little that the soil and the harsh climate of the Dolomites offer.

So, Sauerkraut and bacon are just as typical Hungarian goulash and typical Austrian dumplings (“canederli”), in Trentino an integral part of the kitchen.

Schlutzkrapfen, short Schlutzer is a regional Pasta specialty from Tyrol. They are similar to Italian ravioli and are therefore called ravioli tirolesi in Italy.

Schlutzkrapfen is made with a mixture of rye and wheat flour. The filling traditionally consists of meat from veal or beef or potatoes, in South Tyrol especially from a spinach-pot combination or Rohnen (beetroot). In the latter case, the dish is served with poppy seeds. You will also find variations with fillings of onions, nutmeg, and egg. A Tyrolean classic is Schlutzkrapfen with beet and bacon filling, and in parts of East Tyrol, this specialty is found with a potato filling as Schlipfkrapfen. In any case, you should not miss trying this delicacy if you visit the region.

2. Apfelstrudel – an apple a day keeps the doctor away

… and with this sweet treat from Trentino you will eat even more apples than ever before. Trentino is one of the most important regions in Europe for the cultivation of apples of high quality, even if the cultivated areas in the valley and on some hills are limited. The cultivation, quality control and sale of apples are regulated by so-called cooperatives, including well-known names such as “Melinda” or “la Trentina”. 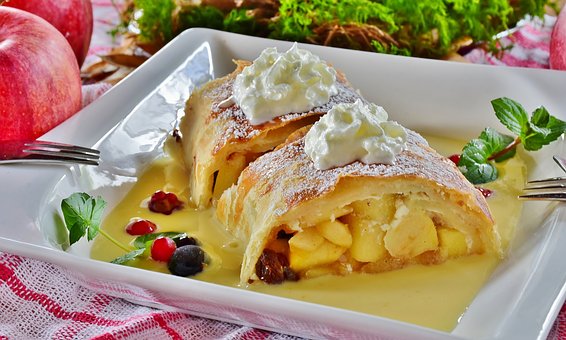 So the apple strudel is a typical dessert of the Alpine region, where it has become a symbol of local culinary tradition. For this purpose, puff pastry is filled with fresh, small-cut apples, sugar, pine nuts, sultanas, cinnamon and butter. This fits a lukewarm sauce made out of sparkling Trentodoc.

It is a crunchy flatbread made from rye flour, water, yeast, salt and various spices such as cumin, fennel seeds, aniseed, Schabzigerklee or coriander. It is characterized by long durability.

Wine – top 3 to know about wines from Trentino – Alto Adige

Winegrowing has a long tradition in the region, which was once an important wine supplier to the Habsburg monarchy (to which Trentino belonged until 1918). Today, viticulture is dominated by cooperatives whose members cultivate most of the vineyards. However, a number of small and medium-sized businesses can hold their own well.

The grape variety number one in South Tyrol (Alto Adige) is with about 1,300 hectares of Vernatsch, a red wine. So as well as in the most well-known DOC Kalterersee (Lago di Caldaro). The red wines are popular for their freshness, lightness, and simplicity.

You can find the indigenous grape variety Vernatsch in two wineries; Cantina Girlan and Weingut Loacker where you will be welcomed for a visit and tasting!

As well fruity white wines are made from Müller-Thurgau, Riesling Italico (Welschriesling), Pinot Grigio, Pinot Bianco and Chardonnay. These varieties which flourish all around the picturesque town of Trento as well as in South Tyrol and a part of Veneto, are labeled under the collective name Valdadige DOC.

However, some of Trentino’s best wines are almost unknown to us because they come from small family wineries with only a few acres of cultivated land in the side valleys, such as the bizarre Val di Cembra. Probably one of the next DOC or DOCG regions with famous mineral and elegant wines.

The white wines are fresh, fruity and pleasantly acidic. Pinot Grigio is by far the most widely grown white wine variety.

Among the red wines, the robust wines from the grape varieties Marzemino and Teroldego convince, which are cultivated only in Trentino. Marzemino produces medium-bodied wines that stand out for their brilliant red color, floral-fruity scent, and bitter-sweet taste. The Teroldego, on the other hand, produces wines with intense color and power. In the nose, he is already strong with intense berry fruit and enthralling scents of earth, truffle, and leather. At a young age, he is rather edgy, wild and untamed. In old age, he can develop into a seducer with complex, strong and spicy taste as well as always distinctive tannin and brisk acidity.

In addition to the local Vernatsch and Lagrein, the red wines include international varieties such as Pinot Nero, Cabernet Sauvignon, and Merlot. The latter two can as well be found in a Cuvée, also outstanding qualities are developed in the barrique. A particular specialty is the Teroldego Rotaliano on the plateau of the same name in the north of the region, which grows on poor gravel soil.

After some experiences in the vineyards, breathe in the fresh mountain air, relax on a lush green meadow and just enjoy the day! The landscape and nature in Trentino has so much to offer. Gentle hills alternate with rugged and imposing mountain peaks.

Named after the town of Meran, the trail winds for over 100 kilometers, with well-developed and signposted ways and paths, through mountain forests, alpine meadows and rugged rocky landscapes around the Texel Nature Park. Thus, the Meraner Höhenweg takes a special position among the many, very beautiful long-distance hiking trails in South Tyrol, because it surrounds one of the most beautiful natural parks in the country. On this beuatiful hike, you can experience the interface between a pristine natural landscape and a cultural landscape unique to humans.

The Kratzberger See is an ideal destination for peace seekers, nature lovers, and families. Far away from noise, traffic and all infrastructures, the lake is nestled gently northeast below the Plattenspitze in a sunny location.

The ideal starting point to reach the Kratzberger See is the mountain station of the Meran cable car.
Starting from the mountain station, follow the broad hiking trail towards the Miesensteiner Joch. Passing under the Ifinger, after a short climb, the landscape opens up and gives you a clear view of the “back” part of Merano. After about 40 minutes of relatively slight incline, the path climbs slightly again, directly below the Meran-facing side of the Plattenspitze goes up to the Miesensteiner yoke, which marks the transition to the Sarntal. Here you can enjoy a wonderful view over Meran. Once you have reached the lake, beach feeling comes on immediately! The north shore, with its white sand and clear water, is almost like a dream beach in Sardinia, if only the water wouldn’t be so cold (about 3 degrees).

3. Val die Rabbi – an alpine valley from a picture-book

The Val di Rabbi is one of the most enchanting valleys of Trentino due to its protected natural resources, most of which belong to the Stelvio National Park. The whole valley is crossed by a comfortable road, which runs for about 12 km along the clear, lively and fish-rich wild-river Rabbies. If you go up the valley, you will first find the village of Pracorno, with its many country houses. Shortly thereafter, you will reach San Bernardo, seat of all services of public interest.

Continuing along the torrent, you will reach the village of Rabbi Fonti, where you will find the park’s thermal bath and visitors’ center, while above it, in a dominant position, rises the Piazzola district. Visitors can look down on green slopes, dense coniferous forests and the peaks of the Ortles Cevedale mountain range.

A near century old wine tradition blended with modern technology